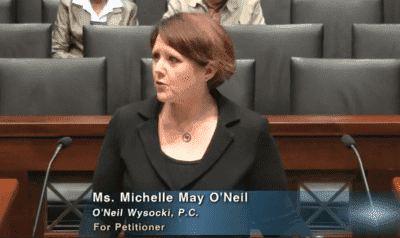 Back in February, we told you about how attorney Michelle May O’Neil argued before the Supreme Court of Texas in the case of Dalton v. Dalton. Well, we are pleased to announce that she successfully defended her client and won the case!

You can see attorney O’Neil arguing before the Supreme Court of Texas here.

The Texas Supreme Court reversed decisions made in the Nacogdoches trial court and the Tyler Court of Appeals by ruling that an out of state alimony agreement/judgment cannot be enforced as though it was a Texas order for spousal maintenance.

In the Court’s opinion, it found that an order to withhold Mr. Dalton’s wages in order to enforce an unpaid out of state alimony agreement/order is not allowed under Texas law. The court’s opinion concluded that “that neither the Oklahoma order nor the Texas trial court’s decree required Mr. Dalton to pay spousal maintenance; instead, they required him to provide “support alimony” that “falls outside of Chapter Eight.”… As explained, under Texas law, an order incorporating a voluntary support obligation that does not qualify as spousal maintenance creates a debt that is enforceable as a contract, not a court-ordered obligation that is enforceable as a judgment… Courts cannot use wage withholding to enforce such an order unless the parties specifically agreed to that enforcement method.”

Although courts in Texas must give full faith and credit to the out of state support order, Texas law dictates how enforcement will proceed or can be remedied. The Court’s opinion states, “So the Texas trial court was required to accept the Oklahoma order as an adjudication of the parties’ respective rights and obligations, but Texas law governs the methods by which the Texas court could enforce those rights and obligations.”

The wife in the case also sought to garnish Mr. Dalton’s retirement benefits as part of the out of state alimony agreement/judgment. However the court ruled against her, declaring that “ERISA does not strip a state’s power to determine how it will govern divorce and support issues in its borders.” Because a garnishment order must come from Texas law, and not federal law, ERISA law doesn’t apply unless state law authorizes the order to garnish retirement benefits.

A significant statement made in the Court’s opinion suggests that not only is garnishment of retirement benefits not a valid remedy to enforce an out state maintenance order, but it also isn’t a permissible remedy for collecting child support or overdue support debts.

Ultimately, the judgment rendered by the Supreme Court of Texas found both of the orders void under Texas law, and reversed the previous courts’ decisions.

We would also like to recognize that as rational for its ruling, the Court cites the case of Kee v. Kee, a case that attorney O’Neil previously won in the Dallas Court of Appeals. In doing this, the court elevated the decision made in Kee to a SCOTX approved decision, despite it being a court of appeals case.

The legal team at O’Neil Wysocki, congratulates attorney Michelle May O’Neil for this major victory that only adds to her already stellar reputation as one of Texas’ fiercest divorce lawyers. With more than 25 years of experience handling family law matters like divorce, child custody, and complex property division, attorney O’Neil has the skills that you need to secure a positive outcome in your case.

Do you need help with your divorce settlement? Call (972) 852-8000 today to speak with one of our Dallas family law attorneys about the details of your case.