On February 27, 2018, Michelle May O’Neil, Senior Shareholder at O’Neil Wysocki, P.C., argued before the Supreme Court of Texas. Attorney O’Neil was arguing on behalf of petitioner Bart Dalton in the case of Dalton v. Dalton.

Appearing before the Supreme Court of Texas, Michelle May O’Neil raised the following questions:

In the case of Dalton v. Dalton, Carol Dalton sued her ex-husband, Bart Dalton, as part of their divorce proceedings in Texas in an attempt to enforce an alimony agreement they reached when they were separated in Oklahoma. Carol Dalton claimed that Mr. Dalton was behind on his alimony and child-support obligations. To remedy this, Ms. Dalton was seeking to obtain payment from his wages and pension, in Texas. Ms. Dalton’s attorney argued for the garnishment of Mr. Dalton’s wages and pension using provisions of the Texas Family Code and Property Code.

However, attorney O’Neil contended that Ms. Dalton’s attempt to garnish the wages and pension of Mr. Dalton, is prohibited by both state statues and the state constitution. The court of appeals ultimately affirmed the trial courts order.

In order to make her argument to the Court, attorney O’Neil utilized a flowchart which illustrated how to enforce post-divorce support. The chart compared the Texas judgment with the Oklahoma agreement order to show exactly what types of remedies can actually be enforced. 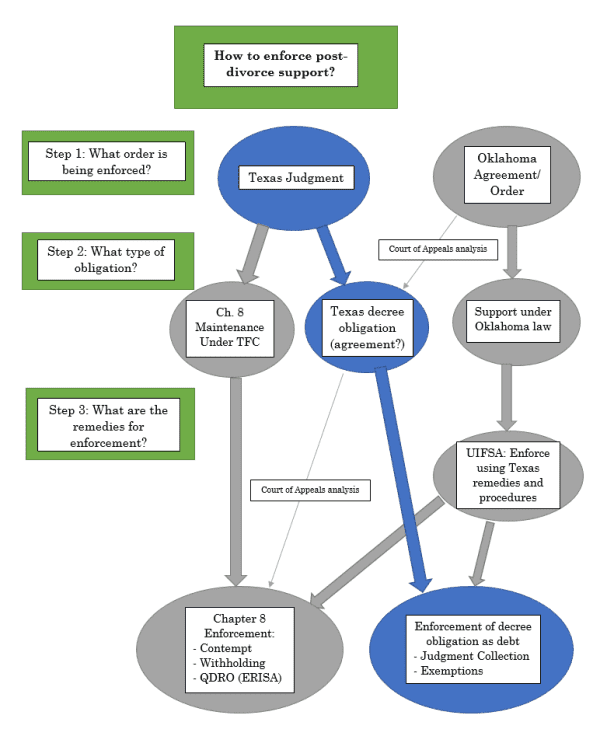 Judges from the Supreme Court of Texas are expected to deliberate on the case for a few months before reaching a decision.

Click here to see Michelle May O’Neil’s appearance before the Supreme Court of Texas: http://www.texasbarcle.com/CLE/SCPlayerMobile.asp?sCaseNo=17-0155&bLive=0&k=&T

Michelle May O’Neil, has over 25 years of experience handling family law matters like divorce, child custody, and complex property division. She has developed a stellar reputation amongst courts in Texas and is known for her lethal combination of sweet-and-salty when pursuing justice for her clients.

Are you or a loved one engaged in an ongoing family law dispute? The attorneys at O’Neil Wysocki can help. Contact our Dallas team of family law lawyers, or call (972) 852-8000 to learn more about what we can do for you today.