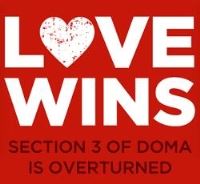 The US Supreme Court issued their decision today in US v. Windsor regarding the federal government’s right to deny benefits to legally married same sex couples. SCOTUS ruled that section three of the Defense of Marriage Act, the section that prohibits same sex federal benefits, is unconstitutional on the grounds of equal protection. This is a monumentous day for same sex couples – giving same sex marriages equal status with heterosexual marriages at the federal government level. This decision is not binding on Texas state law, however. Section 2 of DOMA says that states do not have to recognize same sex marriages from other states, and that section still stands today. The Windsor opinion gives hope for the future of the rights of LGBT couples to marry (and divorce).

James Esseks , Director of ACLU Lesbian Gay Bisexual Transgender & AIDS Project interpreted it this way:• “The core provision of DOMA required the federal government to treat the marriages of same-sex couples one way (as though they had never happened) and the marriages of straight couples a different way (respecting their validity in 1,138 federal contexts). The Supreme Court struck down DOMA both because of that unequal treatment and because the federal government had improperly taken over the states’ normal role of deciding who is married and who isn’t.”• “The demise of DOMA section 3 is also a crucial milestone on the road to LGBT equality because DOMA is the last federal law that requires discrimination against lesbian, gay, and bisexual people. That makes the Windsor decision, which wipes away the core of DOMA, the capstone on decades of work to rid the country of codified anti-gay discrimination at the federal level.• “So Windsor isn’t just the death of the core of DOMA, it’s the end of official federal discrimination against lesbians and gay men. That’s quite something to celebrate!”

As I predicted in my blog post in March – DOMA – does it matter in Texas – this opinion has little effect on each individual state’s right to pass their own laws about same sex marriages. Until there is a challenge to Section 2 of DOMA, squarely challenging DOMA’s overriding of the full faith and credit clause of the US Constitution, same sex couples are stuck with the status quo in Texas. A couple who is married in a state that recognizes same sex marriages, who then moves to Texas and breaks up, cannot get divorced under Texas laws.