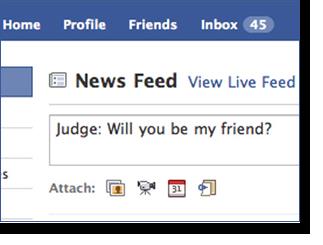 One client complained… the opposing attorney is friends with the Judge on Facebook and can see his posts. Isn’t that wrong?

All of us who use Facebook regularly know that being “friends” on Facebook is not the same thing as being friends in real life. I have many friends, including most of the judges I practice in front of, on Facebook. Some of those “friends” I would barely know if I saw them in person. A few I might not even recognize. I’m sure it is the same with the judges.

I approach Facebook as a polite conversation that you might have at a business-related happy hour. Business related topics such as new law passed by the Legislature, new cases reported out of the courts of appeals, interesting issues related to Texas family law are all appropriate topics of conversation. I even post about vacations, cute things my dogs do, my hobbies (gardening and reading), great meals that I have in restaurants or at home, etc. All of those are things you might talk to someone, even a judge, about at a happy hour.

Many lawyers use Facebook to promote their professional standing. This can include “friending” other lawyers, posting status updates such as photos and videos on training events they have attended, photos of the lawyer with a judge, announcing successful verdicts, and generally commenting on legal affairs. According to the ABA, 40% of judges have Facebook pages, so lawyers often “friend” judges and judge “friend” lawyers.

To be clear, though, there is a boundary. Judges and lawyers (and even litigants) are bound by certain ethical rules. For example, a judge must avoid even the appearance of impropriety. Lawyers and litigants must refrain from attempts at ex parte communication with a judge in an effort to sway the judge’s opinion on a particular matter. So that means, as a lawyer I cannot discuss on Facebook specifics about a hearing I’m going to have today in a way that might be perceived as attempting to persuade the judge to my client’s side. A litigant or client cannot post to the lawyer on Facebook about his or her case. Likewise, it would be a very bad idea for a judge to comment on Facebook about a hearing or the lawyers or litigants that appeared in front of the court on any given day.

One judge in Collin County, Judge Scott Becker, was recently vindicated in having his Facebook page. A criminal defendant was pending probation revocation and ended up getting sentenced to prison. The defendant complained to the appeals court that the judge was Facebook friends with the father of the victim and the father sent the Judge a Facebook message intended to sway the Judge’s decision in the case. The Judge acknowledged being Facebook friends with the Father of the victim and acknowledged receiving the message, but the Judge stated that he didn’t really know the man other than through political circles. The Judge also stated that he stopped reading the message as soon as he realized what it was, he immediately sent a message rebuking the man. Further, the Father was seeking leniency on behalf of the defendant, so if the man’s plea had been successful it would have helped the defendant.

The court of appeals confirmed that being Facebook friends is not the same thing as being friends in real life. “Merely designating someone as a ‘friend’ on Facebook does not show the degree or intensity of the judges’ relationship with a person. One cannot say, based on this designation alone, whether the judge and the ‘friend’ have met; are acquaintances that have met only once; are former business acquaintances; or have some deeper, more meaningful relationship. Thus, the designation, standing alone, provides no insight into the nature of the relationship.” Becker responded in the way that judges are supposed to respond, whether they’re approached online, at a party, or in their chambers. In other words, Facebook is now indistinguishable from real life, comments Eric Nicholson of the Dallas Observer.